Cadbury in the world Hide

Cadbury in the world Hide

The Cadbury Worldwide Hide campaign was created to help consumers hide Easter eggs and engage with loved ones when they couldn’t be physically together during the pandemic. The virtual experience allowed users to purchase a real Cadbury Easter Egg, virtually hide it via Google Maps in a single location, and then write the recipient a personalized hint to find the egg. Once the recipients found the egg, they received a real, physical chocolate egg delivered to their home. 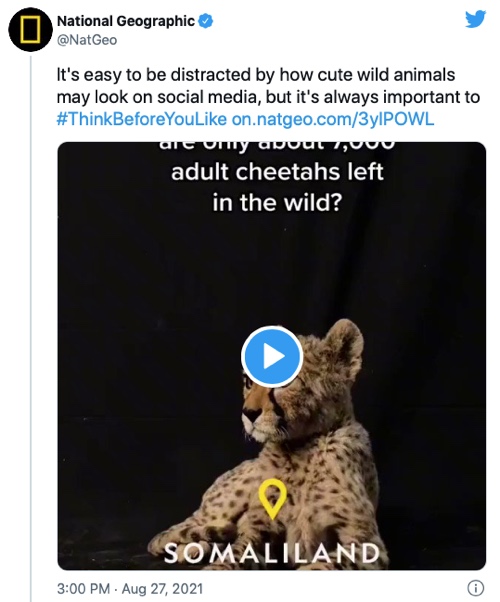 National Geographic ran the #ThinkBeforeYouLike campaign to raise awareness about the illegal pet trade in endangered cheetahs. Modern cheetah owners use Instagram and TikTok to show off their pets, which are mostly collected from the wild where less than 7,000 adult cheetahs remain. Before followers like or share a social media post featuring cheetahs, they were asked to take a few seconds to think about the legality and ethics of what is depicted. The hashtag #ThinkBeforeYouLike was used to help spread the message about the role of social media in encouraging illegal wildlife trade.

Anheuser Busch launched the #LetsGrabABeer campaign to raise awareness of Covid-19 vaccination efforts and encourage consumers to socialize responsibly as restaurants begin to reopen. It rewarded adults who proved they were vaccinated with a free round of beer. Then, over the summer, the brewer ran a nationwide campaign with the White House to help achieve President Biden’s goal of encouraging as many Americans as possible to get vaccinated, providing free drinks when the nation has met the White House vaccination target. Adults simply had to upload a photo of themselves in their favorite spot to receive a beer. 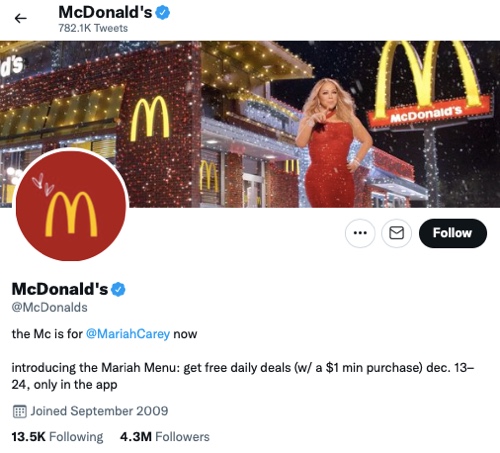 The Dove Self-Esteem Project was established in 2004 to help young people realize their potential by developing positive self-confidence and self-esteem. In 2021, Dove worked with Grammy Award-winning musician Lizzo to support self-esteem building in women and girls and help end hair discrimination through the Crown Coalition. To kick off the partnership, Dove launched its ‘The Selfie Talk’ campaign, tackling the current digital distortion girls are exposed to on social media. 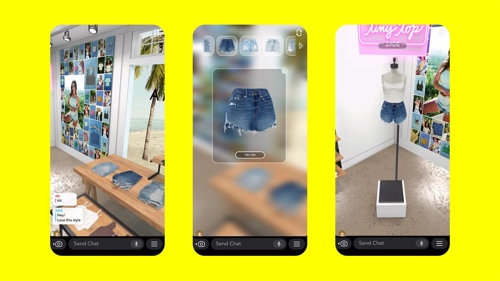 American Eagle Outfitters has launched a 2021 back-to-school campaign, “Future Together. Jeans Forever ”, with new styles for teens. Actors Caleb McLaughlin, Jenna Ortega, Addison Rae, Chase Stokes and Madison Bailey kicked off the campaign with a conversation on Clubhouse. Additionally, American Eagle has partnered with Snapchat to launch a ‘dress yourself’ experience, where users can purchase and try on selected augmented reality looks using the front camera. Additionally, along with Bitmoji, American Eagle launched a digital clothing line to outfit Bitmoji avatars of actors on Snapchat and the Bitmoji app. 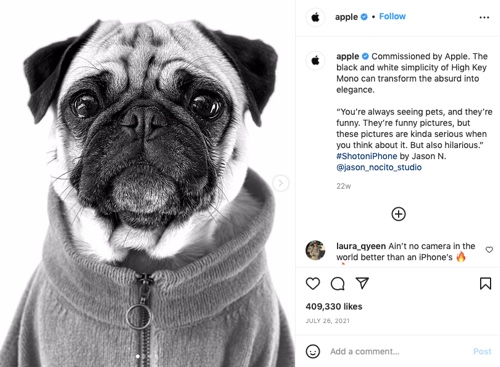 Apple launched its “Shot on iPhone” campaign in 2014 with outdoor billboard ads of photos taken on the device. Two years later, Apple hosted the first competition to promote user-generated content, launching one of the longest-lasting social media campaigns, with over 23 million images and video clips submitted only to Instagram. . In 2021, Apple shifted the campaign towards pet photography, with the recent surge in popularity of pet adoption. Apple commissioned a series of pet portraits from acclaimed photographer Jason Nocito and hosted a free virtual event on how to take better pet photos.

To promote its Shorts tool for creating videos up to 60 seconds long, YouTube launched its “The Shorter Side of YouTube” campaign with 15 and 30 second spots, featuring musicians BTS, The Weeknd, Doja Cat and Camila Cabello. Emphasizing the ease of its competitor TikTok, the YouTube spots show how users can create clips using the sampled background audio and video. The campaign was launched with a $ 100 million fund to pay creators for creating original content on Shorts. 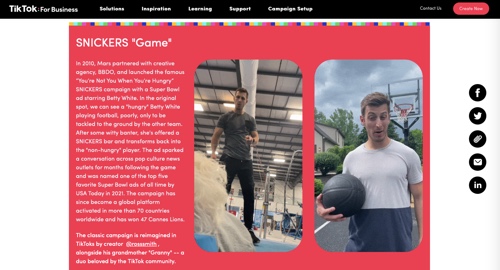 TikTok launched the Re: Make campaign to celebrate iconic ad campaigns and inspire brands and agencies with the platform’s creativity. Skittles, Snickers, and Old Spice have each partnered with creators to reinvent campaigns as TikToks. Using the hashtag #TikTokReMake, users were encouraged to create their own interpretations of their favorite ads. 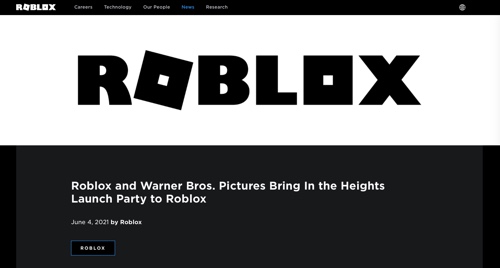 To promote the summer film “In the Heights”, Warner Bros. Pictures hosted a virtual party on Roblox, the gaming platform. “Launch Party on Roblox” brought Latin American music, dance and culture from the film’s iconic Washington Heights neighborhood into the Roblox metaverse. Visitors to the Virtual Quarter could hang out outside the film’s central gathering store, contribute murals, and watch behind-the-scenes videos and interviews, including a dance tutorial from the film’s choreographer, virtual items, interactive mini-games and treasure hunts. . The meta-event includes a question-and-answer session and a virtual dance performance choreographed by a flash mob, like the movie. 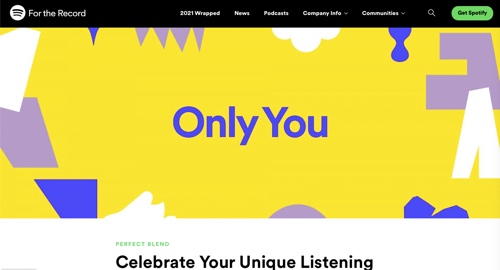 In 2021, Spotify launched the “Only You” campaign with an in-app experience and personalized playlists to celebrate the fact that your plays are unique, despite having 356 million users on Spotify and over 70 million users. tracks and 2.6 million podcasts. Spotify gave each user their own unique audio birth chart for revealed musical connections, personalized dinner mixes, unique audio pairings based on listeners’ interests, personalized song of the year, music for moments of the day and identifying personalized music and podcast genres.