Sink stars as Tess, a young woman grappling with the immeasurable and heartbreaking death of her younger sister, Zoe (Mckenzie Noel Rusiewicz). As her mother (Jessica Capshaw), stepfather (Justin Bartha) and sister (Vivien Lyra Blair) each grieve in their own way, Tess seeks support from two strangers: her biological father, Nick (Theo Rossi) and Jimmy (Kweku Collins), a juvenile delinquent who lives in the neighborhood.

Directed by Gren Wells (“The Road Within”), “Dear Zoe” was scripted by Marc Lhormer (“Bottle Shock”) and Melissa Martin (“A Wedding For Bella”) based on the novel by Phillip Beard. Lhormer and Brenda Lhormer produced for their company Zin Haze Productions.

“It’s a universal story of loss and healing,” said Bill Vergos, head of digital film distribution at Freestyle Digital Media. “You get the full range of emotions like in all great movies, and that’s how we knew we wanted to be a part of it. Not to mention that Sadie’s performance is outstanding.

Sink has played Max Mayfield in the Netflix juggernaut series “Stranger Things” since 2017 and will next appear in Darren Aronofsky’s “The Whale.” Rossi has several projects underway, including the upcoming Sundance thriller starring Aubrey Plaza “Emily the Criminal.” Capshaw played Dr. Arizona Robbins on “Grey’s Anatomy” for nearly a decade and recently appeared on “Holidate” with Emma Roberts. “National Treasure” star Justin Bartha will reprise his role in Disney+’s serialized expansion of the Nicholas Cage films. Blair recently starred in “Obi-Wan Kenobi” as Leia Organa. 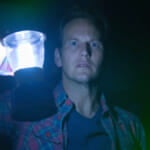